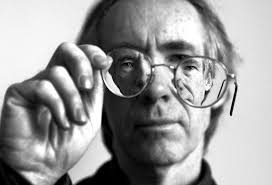 At least since the early ’80s, it’s began to fill out for me as an idea in fiction, that there’s something very entwined about imagination and morals. That one of the great values of fiction was exactly this process of being able to enter other people’s minds. Which is why I think cinema is a very inferior, unsophisticated medium.

ZS: Absolutely. Because you get surfaces only.

IM: Right. And with the novel we have happened to devise this form, this very elastic, mutable form that can allow us moments of real human investigation. Milan Kundera says very wise things in this context. He lays a lot of stress on the novel as a mode of investigation. It’s an open-ended way of looking at our own image, in ways that science can’t do, religion’s not credible, metaphysics is too intellectually repellent on its surface—this is our best machine, as it were.